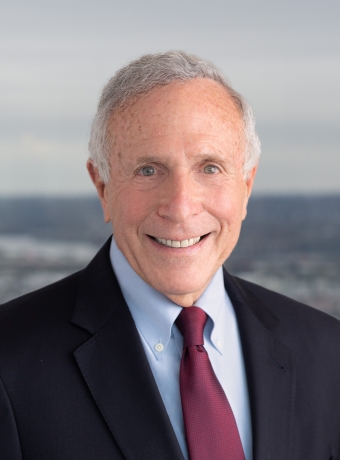 Expert Negotiator, Attorney, Sports Agent, Educator, New York Times Bestselling Author, and Civic Leader, Ron Shapiro attended Haverford College and graduated Cum Laude from Harvard Law School in 1967. After moving to Baltimore in 1967 for a federal clerkship, he began teaching law school in 1968.  From 1972 to 1974 Mr. Shapiro served as Maryland State Securities Commissioner and earned a reputation as one of the most effective state investment officials in the nation. In 1972, he founded what would become Shapiro Sher, a Maryland law firm providing business, litigation, and bankruptcy law services. There, Mr. Shapiro developed a national reputation for his handling of corporate and securities law matters. Subsequently, in 1976, Mr. Shapiro founded Shapiro, Robinson & Associates, a sports management firm that developed a national reputation through its holistic approach to contract negotiation, sound financial management, and commitment to community involvement on the part of its clients. In 1995 he founded Shapiro Negotiations Institute, a negotiation, sales, and influence training and consulting firm that has trained over 350,000 professionals in the art of negotiation, dealing with difficult personalities, and enhancing preparation and listening skills.

While Mr. Shapiro no longer practices law and is no longer involved with Shapiro Negotiations Institute, in 2017, he founded Shapiro Advisors LLC through which he counsels organizations and individuals on negotiations and best business practices. In addition, he is the Founder and Creator of the annual business conference, the Butler Conference of Leaders, which brought together CEOs, and other business, professional, and non-profit leaders from throughout the nation to address economic, investment, philanthropic, and social issues, and to network.

USA Today called Ron Shapiro "one of baseball's most respected agent-attorneys," and The Sporting News named him one of the "100 most powerful people in sports." His impressive list of clients includes more Hall of Famers than any other agent. In addition, Mr. Shapiro is the Special Advisor to the owner of the NFL Baltimore Ravens and to the General Managers of the NBA San Antonio Spurs and Oklahoma City Thunder.

Shapiro has also authored and co-authored books on corporate and securities law and taught at the Johns Hopkins University, the University of Maryland School of Law, and the University of Baltimore School of Law, and he has guest-lectured at many other institutions. A charismatic and creative individual, Shapiro has appeared as a negotiations expert on ABC's "Good Morning America"; CNBC's "Power Lunch"; Mutual Radio's "The Larry King Show"; National Public Radio's "Morning Edition" and "Talk of the Nation"; ABC's "Nightline"; and ESPN's "Mike and Mike in the Morning" and "Up Close". In addition, he hosted a weekly talk show and a series of prime-time specials on NBC Baltimore affiliates.

Committed to public and civic matters, Shapiro has chaired over 25 boards of charitable and community organizations, as well as serving on numerous others. He was also Treasurer and Finance Chairman for former Baltimore Mayor, Kurt Schmoke.

Shapiro has received numerous special honors and recognition including, among others: induction into the Baltimore Sun's Maryland Business and Civic Hall of Fame and the Baltimore Jewish Hall of Fame; the American Sportscasters Association Hall of Fame Mel Allen Service Award for distinguished public service; The American Red Cross Lifetime Achievement Award; and the American Law and Jurisprudence Award in recognition of many years of outstanding leadership and excellence in the practice of law. He has also been named a member of “The Champions: Pioneers and Innovators in Sports Business” by SportsBusiness Journal, which recognized his distinct and sustainable impact on the sports industry, record of achievement, and for being a mentor and leader to so many throughout the world. SmartCEO Magazine recognized Shapiro as one of the "Twenty Most Admired Leaders”. He has also been named "one of Maryland’s Super Lawyers," featured in the Best Lawyers in America® for 20 consecutive years, is a recipient of the Daily Record's “2010 Leadership in Law Award”, and was named “Sports Law Lawyer of the Year” in the 2012 edition of Baltimore’s Best Lawyers®.

Additionally, he spoke in the Harvard Law School Traphagen Distinguished Alumni Speaker Series, where he was honored for his “multifaceted and fascinating career.” Mr. Shapiro was named the 1996 Edward B. Shils Lecturer in Arbitration and Alternative Dispute Resolution at the University of Pennsylvania Law School.

Mr. Shapiro's dispute-resolution techniques have settled a major symphony orchestra strike, facilitated solutions to human relations problems, and resolved disputes in governmental, corporate, and major biotechnology challenges. Mr. Shapiro has negotiated on behalf of, or served as deal coach to, Fortune 500 companies, government agencies, as well as entertainment and news personalities.  Ron Shapiro is frequently cited by parties representing each side in a negotiation as the ultimate 'Win-Win" negotiator.

THE POWER OF NICE: How To Negotiate So Everyone Wins – Especially You!

Mr. Shapiro’s book, THE POWER OF NICE: How To Negotiate So Everyone Wins – Especially You!, was excerpted in Fortune Magazine and named one of the “Top Ten ‘On the Job’ Business Books of the Year” by the Library Journal. A revised edition was released in February 2015.

BULLIES, TYRANTS & IMPOSSIBLE PEOPLE: How To Beat Them Without Joining Them, made the Wall Street Journal’s

His second book, BULLIES, TYRANTS & IMPOSSIBLE PEOPLE: How To Beat Them Without Joining Them, made the Wall Street Journal’s Best Seller List.

DARE TO PREPARE: How To Win Before You Begin

His third book, DARE TO PREPARE: How To Win Before You Begin, made the New York Times, Business Week and the Wall Street Journal’s Best Seller Lists, was named the winner in two categories in the National Best Books 2008 Awards by USA Book News, and was named Gold medal winner of the Success & Motivation category of the 2009 Axiom Business Book Awards.

PERFECTING YOUR PITCH: How to Succeed in Business and in Life by Finding Words That Work

Mr. Shapiro’s fourth book, PERFECTING YOUR PITCH: How to Succeed in Business and in Life by Finding Words That Work was released in November 2013.

May 06, 2022
The Daily Record reports on Shapiro Sher's 50th anniversary

Fifty years ago, Ron Shapiro founded our firm. In The Daily Record​, he and firm president Bill Carlson reflect on how Shapiro Sher has prospered and grown over half a century.

Attorney at Law Magazine has named Ronald M. Shapiro its Attorney of the Month.

Inc. magazine talks to Ron Shapiro about his new book, Perfecting Your Pitch: How to Succeed in Business and in Life by Finding Words That Work.

November 26, 2013
Ron Shapiro On The Three Keys To Negotiating A Successful Deal

Ron Shapiro blogs for Forbes Magazine in this preview of his new book Perfecting Your Pitch: How to Succeed in Business and in Life by Finding Words that Work.

The Ronald M. Shapiro Excellence in Mentoring Award created by Maryland Mentor in recognition of his achievements in mentoring

Chimes Hall of Fame, inductee, for contributions and community service

Inducted into the Baltimore Jewish Hall of Fame

Inducted into the Cheltenham High School Hall of Fame

Recipient of The Forman Award, as a superior Haverford College Athlete who has devoted himself to the betterment of society

Received the Children's Guild award for "Making the Impossible - Possible"

The Ronald M. Shapiro Research Award and Lecture was established in recognition of Mr. Shapiro's service at the Greenbaum Cancer Center of the University of Maryland